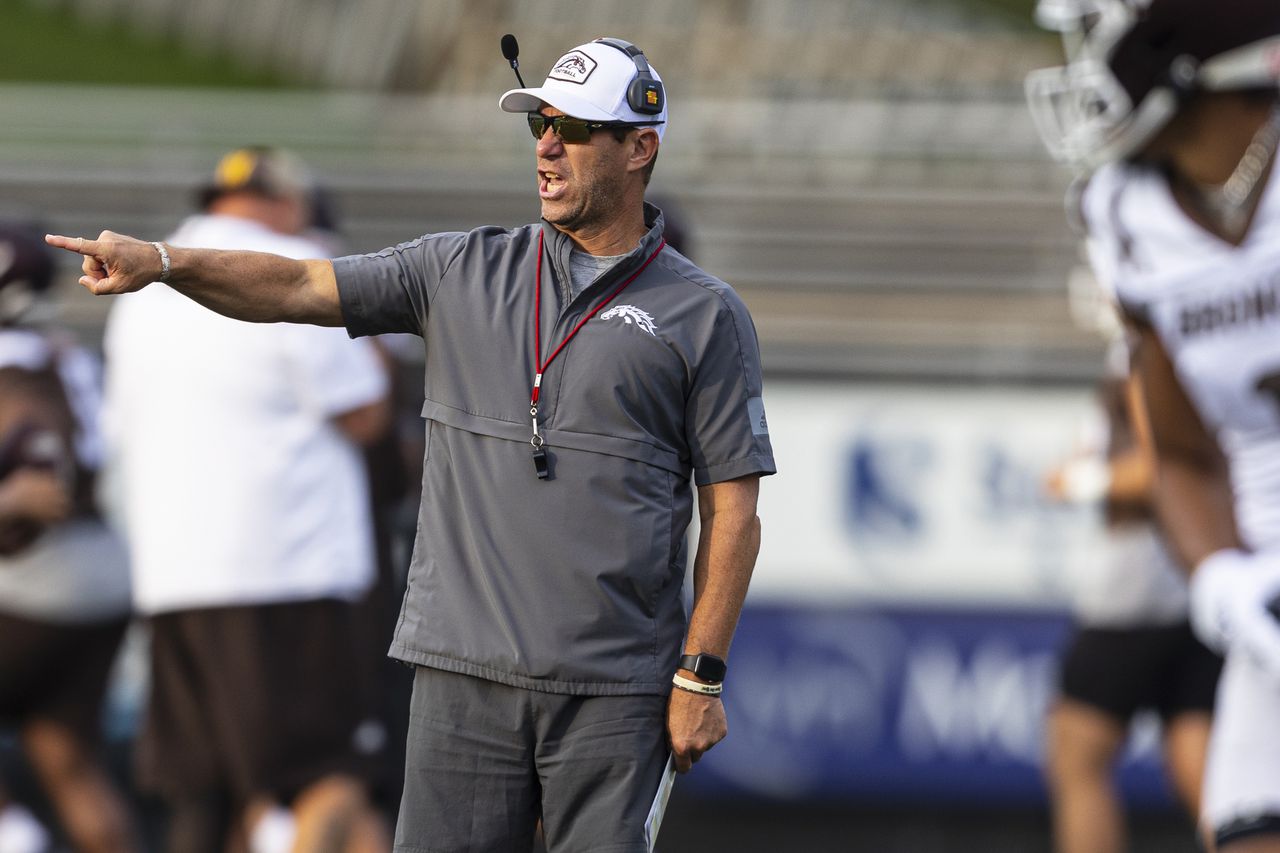 KALAMAZOO, MI — Western Michigan’s offense got a facelift this offseason with the hiring of coordinator Jeff Thorne, but the formations and concepts he crafts should be familiar to longtime Broncos fans.

Thorne has been calling college football offenses for 20 years, and although he’s headed for his first at WMU, his philosophy, particularly involving the passing game, has Kalamazoo roots.

It all goes back to the 2004 season, when the Thorne Division III North Central College team introduced a game-changing receiver in Tyke Spencer.

North Central opponents leaned on Spencer, which led Thorne, then the Cardinals’ offensive coordinator, to consult with childhood friend and current WMU head coach Tim Lester on how to create space for its primary target.

“We were struggling to move it around and figure out the most efficient way to do it,” Thorne said of Spencer. “Tim and I go back 30 years, and we collaborated – we still do and do now more than ever – but we talked about how they called their training to put Greg Jennings in positions where you could create matches, so that’s a big part of it.

“A lot of things they did offensively back then, you see some of that in our system today.”

Lester served as WMU’s quarterbacks coach from 2005 to 2006, during which time Jennings won the Mid-American Conference Offensive Player of the Year award and became a second-round pick of the Packers from Green Bay.

Now in his sixth year as Broncos head coach, Lester was able to loosen his grip on the offense by bringing in a longtime friend and colleague, who shares similar football philosophies.

“It was great for me to have a guy I’ve known for 30 years,” Lester said. “We were raised the same, so the way he thinks is the way I think, and it’s fun to be able to jump into the offensive room and the defensive room and be a defender on both sides and not be so one-sided that I can’t help Lou (defensive coordinator Lou Esposito).

As for what fans should expect to see from the new offense, Lester said receivers will be lined up in multiple ways in an effort to prevent defenses from locking in star receiver Corey Crooms, who is expected to be the version of Jennings from this year.

“The flexibility to get into tighter sets and group sets and change our lineups is a bit easier in this offense and formation tree, so hopefully that will allow us – especially in the red zone and the times when we want to get tight and loose and wide and bundled,” Lester said. “You’ll see a little more of that this year than in the past.”

Getting players to fully grasp the playbook is one of the biggest challenges in setting up a new offense, and Thorne’s system isn’t the easiest to grasp.

“Players really need to know every position,” Lester said after the team’s first practice with the pads on Tuesday. “It’s a bit more like an NFL system, where you have to know every spot, and it’s tough with a new system and a new roster, so we had to use timeouts today, which was really frustrating for me, and I got past the offense pretty well on that. We have to get to the point where we’re better at these things.

After practice on Friday, Thorne was more complimentary about how his unit was performing the playbook, but said there was still a long way to go.

“We are growing every day,” Thorne said. “We have installed a new offense; we have eight workouts right now, and pretty much everything is in there, so it’s just a matter of getting the number of reps we need to perfect our technique, our craft, and to make sure we line up in the right way and are his/her assignment. We’re making a lot of progress, but we’re not where we need to be.

The fact that WMU’s offense has to deal with MAC’s best defense from a year ago doesn’t help early progress, but the hope is it will help them prepare against some of the best teams on the schedule. in 2022.

“One of the biggest challenges is going against the defense that they have to face every day,” Thorne said. “It’s an excellent defence; Coach Esposito is doing an amazing job. They’re aggressive, have multiple fronts, lots of different looks, and for our young quarterbacks, what a great way to learn.

“When we come into the season and face a team with multiple appearances, we can fall back on our training and say, ‘Hey, look, we saw a lot of that in fall camp. There’s nothing to worry too much about here. Let’s sit back and watch what we need and put our eyes where they belong.

WMU opens its season with a 7 p.m. kickoff at Michigan State on Friday, September 2.