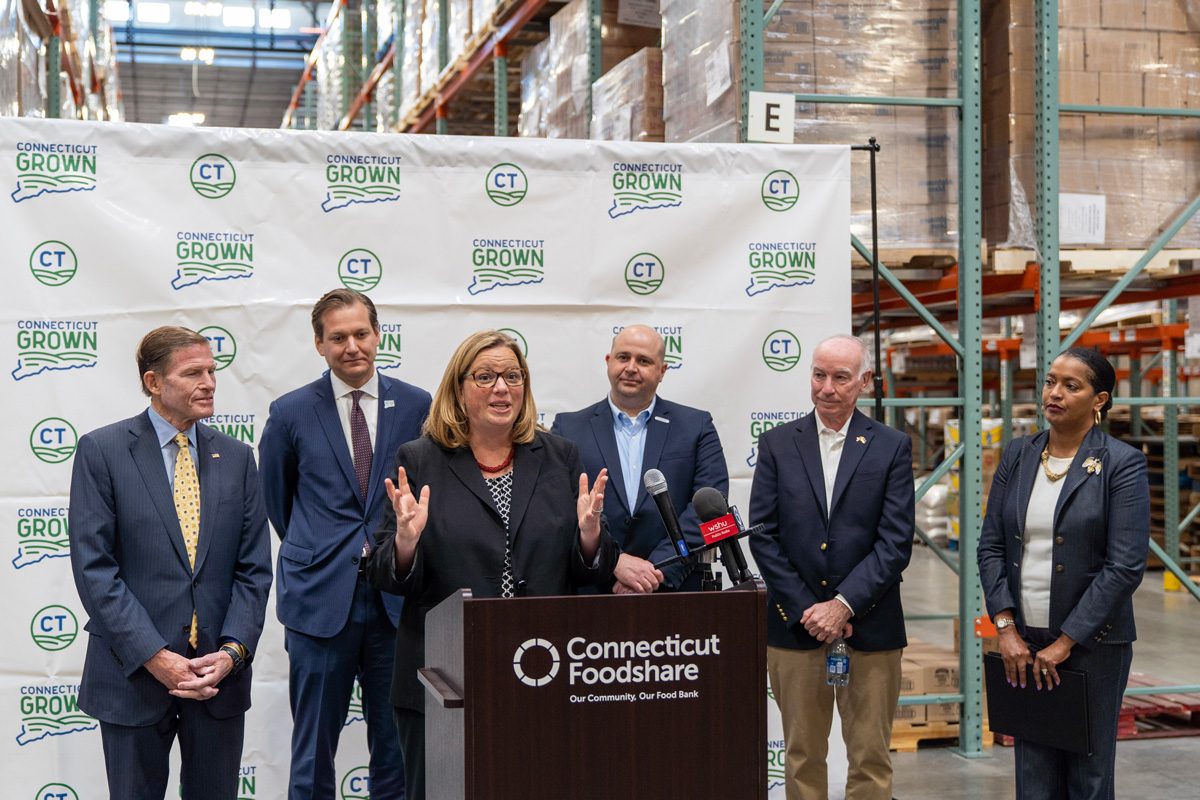 The U.S. Department of Agriculture announced an agreement on Wednesday that will provide funding to Connecticut to help feed the food insecure by supporting local farmers and food delivery organizations across the state.

The agreement – which was the second concluded with a state by the USDA so far under the new Local Food Assistance Program funded by the American Rescue Plan – was announced at the Connecticut Foodshare facility in Wallingford. US Senator Richard Blumenthal and US Representatives Joe Courtney and Jahana Hayes attended, along with USDA Undersecretary Jenny Lester Moffitt and State Department of Agriculture Commissioner Bryan Hurlburt.

Moffitt said the USDA is pleased to partner with Connecticut to address food insecurity and is grateful for the state’s early commitment to food security. Local Food Assistance Cooperation Agreement (LFPA). She also said she looks forward to working with more states and tribal governments to strengthen local partnerships and ensure underserved communities have access to healthy, locally sourced foods.

Hurlburt said the funds received through the LFPA cooperative agreement will allow the state to continue its efforts to bring locally grown foods to the tables of underserved neighbors.

“Throughout the COVID-19 pandemic, Connecticut has actively engaged in emergency feeding programs with an emphasis on the inclusion of CT Grown products and this presents an opportunity to expand these efforts,” Hurlburt said.

Jason Jakubowski, president and CEO of Connecticut Foodshare, said he was grateful for the help from state and federal governments.

“We are excited to increase the amount of nutritious Connecticut-grown produce available to the people we serve and to forge new partnerships with emerging farmers as well as expand existing relationships,” Jakubowski said.

Foodshare reports that more than 400,000 people are struggling with food insecurity in Connecticut, including more than 100,000 children.

According to Monica Obrebski, director of marketing and communications at Foodshare, $850,000 of the $2.6 million will go to Foodshare to help the organization better connect with emerging local farmers and established farms, as well as with the existing network of approximately 500 small food delivery organizations across the state, including food pantries, soup kitchens and others.

Additionally, Obrebski explained, the funds are being provided not only to improve the logistics and communication behind the convoluted local supply chain that puts food on the shelves of soup kitchens across the state, but also to spur the local economy of producers. Foodshare will use the funds to purchase unsold produce from local producers at market prices.

How will this work?

Currently, farmers sell to the public in their own stores or at farmers’ markets, and in bulk to grocery stores. But, in general, some of the food expires before it is sold at source or by retailers.

This is where Connecticut Foodshare comes in with its existing Retail Rescue program.

Rather than wasting food, Obrebski said grocery stores are already freezing produce, dairy and meat for pick-up by trained volunteers. Volunteers check the temperature of food and bring it back to Foodshare facilities in Wallingford and Bloomfield, or sometimes they take it directly to the pantries. The idea, Obrebski said, is to make more of those connections with small shops, growers and others so more of the food can reach more places where it’s needed.

Foodshare also handles the logistics behind using trained volunteers who pick up and deliver food to the roughly 500 small food distributors in the state.

Obrebski said they are calling the new effort “Farm to Neighbors,” and the program has two parts:

• For established farms, Connecticut Foodshare will use the funds to purchase food from farms at market price. The plan is to increase the number of participating farmers and the food will flow from the farm at Foodshare to the pantries.

• For emerging farms, there is a web-based system called Meal connectionwhich was created by the non-profit organization fighting hunger Feed America, where emerging farms can post information about available and unsold food they have to donate. Local food pantries can then log into Meal Connect and claim available food based on those messages, with volunteer pickup provided by Connecticut Foodshare. The directory of food flows from farm to pantry, using Meal Connect to make the connection.

Obrebski said they hope to increase connections and communication between farmers and local distribution agencies so they can manage the transport of food between them.

“We are excited to begin running this program and want to take this opportunity to encourage farmers of all sizes across the state to connect with us and get involved,” Obrebski said. “We don’t follow the traditional model of picking the lowest bidder, and there are many partnership opportunities at all levels.”
For a list of all Foodshare partners by city, check out their annual report and scroll down to “Partner Programs”.