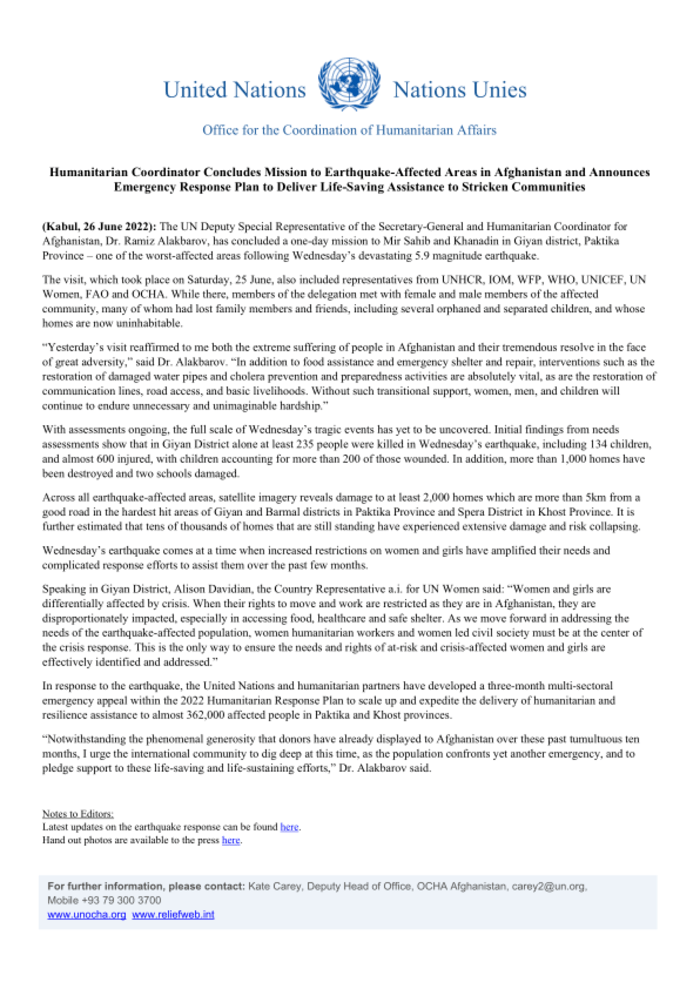 (Kabul, June 26, 2022): The Deputy Special Representative of the United Nations Secretary-General and Humanitarian Coordinator for Afghanistan, Dr. Ramiz Alakbarov, concluded a one-day mission to Mir Sahib and Khanadin in Giyan district, Paktika province – the one of the hardest hit areas after Wednesday’s devastating devastation. Magnitude 5.9 earthquake.

The visit, which took place on Saturday 25 June, also included representatives from UNHCR, IOM, WFP, WHO, UNICEF, UN Women, FAO and OCHA . During their stay, members of the delegation met female and male members of the affected community, many of whom had lost family members and friends, including several orphaned and separated children, and whose homes are now uninhabitable.

“Yesterday’s visit confirmed to me both the extreme suffering of the Afghan people and their tremendous determination in the face of great adversity,” said Dr Alakbarov. “In addition to food assistance and emergency shelter and repairs, interventions such as the restoration of damaged water pipes and cholera prevention and preparedness activities are absolutely vital, as is the restoration of communication, road access and basic livelihoods. Without such transitional support, women, men and children will continue to endure unnecessary and unimaginable hardship. »

With ongoing assessments, the full extent of Wednesday’s tragic events has yet to be uncovered. Early results from needs assessments show that in Giyan district alone, at least 235 people were killed in Wednesday’s earthquake, including 134 children, and nearly 600 injured, with children accounting for more than 200 of the injured. In addition, more than 1,000 houses were destroyed and two schools damaged.

Across all earthquake-affected areas, satellite imagery reveals damage to at least 2,000 homes located more than 5 km from a good road in the hardest-hit areas of Giyan and Barmal districts in the Paktika Province and Spera District in Khost Province. It is further estimated that tens of thousands of houses still standing have suffered extensive damage and are at risk of collapse.

Wednesday’s earthquake comes at a time when increased restrictions on women and girls have amplified their needs and complicated response efforts to help them over the past few months.

Speaking in Giyan District, Alison Davidian, Acting Country Representative of UN Women, said: “Women and girls are differently affected by the crisis. When their rights to move and work are restricted as they are in Afghanistan, they are disproportionately affected, especially in terms of access to food, health care and safe shelter. As we move forward in responding to the needs of the earthquake-affected population, women humanitarian workers and women-led civil society must be at the center of the crisis response. This is the only way to ensure that the needs and rights of women and girls at risk and affected by crisis are effectively identified and addressed.

In response to the earthquake, the United Nations and humanitarian partners have developed a three-month multi-sectoral emergency appeal under the 2022 Humanitarian Response Plan to scale up and accelerate the delivery of humanitarian and resilience assistance to nearly of 362,000 people affected in Paktika and Khost. provinces.

“Notwithstanding the phenomenal generosity that donors have already shown to Afghanistan over the past ten tumultuous months, I urge the international community to dig deep at this time, when the population is facing a new emergency, and to commit to supporting these vital and life-saving efforts. – sustained efforts,” said Dr Alakbarov.

The latest earthquake response updates can be found here.
Handout photos are available for the press here.