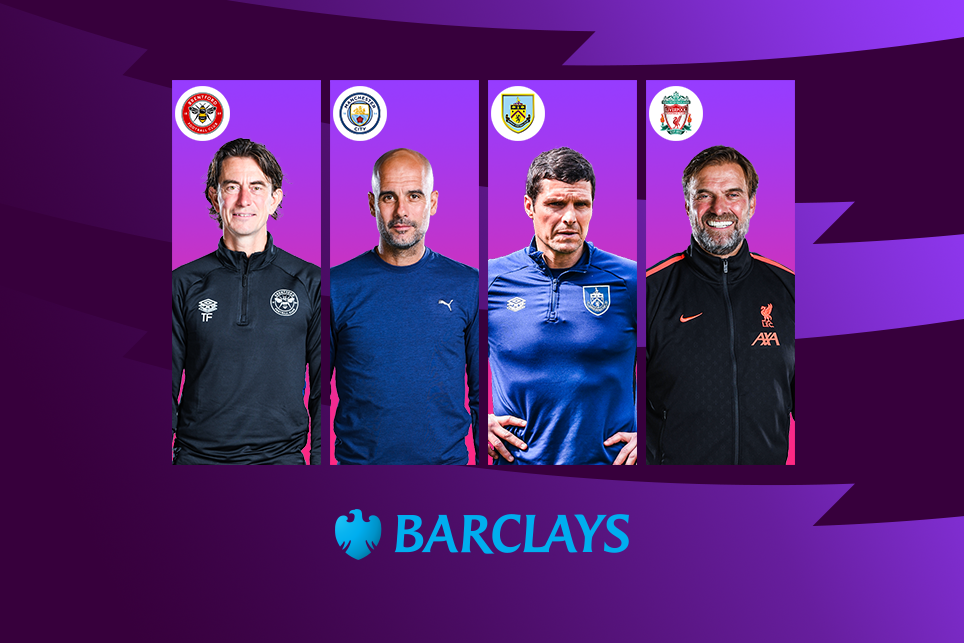 Select your April Barclays Manager of the Month

Four men who went unbeaten in April have been nominated for the Barclays Manager of the Month award, and you can help decide who wins.

Choose your favorite from Thomas Frank, Pep Guardiola, Mike Jackson and Jurgen Klopp by voting below by 12:00 p.m. BST on Monday, May 9.

Your vote will be combined with those of a panel of football experts to decide the winner, who will be revealed next week.

Thomas Franck (BRE)
P4 W3 D1 L0​ GF8 GA2 GD+6
The Dane’s side at Brentford only dropped one point in April. Frank secured the club’s first win over west London rivals Chelsea since 1939, beating them 4-1, and followed that up with wins over West Ham United and Watford, and a draw with Spurs.

Pep Guardiola (MCl)
P5 W4 D1 L0​ GF16 GA3 GD+13​
Guardiola ensured that Manchester City stayed ahead in the title race, drawing with challengers Liverpool and winning all of their other games, against Burnley, Brighton, Watford and Leeds. His team scored 16 goals during the month.

Mike Jackson (BUR)
P4 W3 D1 L0​ GF6 GA2 GD+4
After temporarily taking charge following the departure of Sean Dyche, Jackson left his role as Under-23 manager to become the first Burnley manager to go unbeaten in their first four top-flight matches. He oversaw a dramatic win over Watford, wins over Southampton and Wolves and a draw at West Ham.

Jürgen Klopp (LIV)
P5 W4 D1 L0 GF11 GA2 GD+9
Klopp kept his Liverpool side hot on the heels of leaders Man City, winning four matches without conceding, with two of those victories against fierce rivals Manchester United and Everton. The Reds also came from behind twice to earn a draw at the Eithad Stadium.

Also in this series