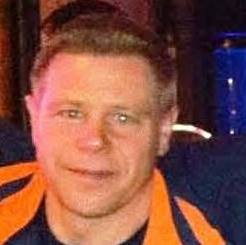 After serving as Acting City Manager of Alma for the past nine months, Aeric Ripley has been formally named to take on the role for the future.

He was appointed to the interim role in September 2021 to replace Matt Schooley, who retired.

Ripley, 51, was originally hired as director of the city’s Downtown Development Authority 23 years ago and added the title of deputy city manager to his role in 2011.

He is delighted to finally officially have the job.

“It actually feels good,” Ripley said. “I’ve been here a long time and it’s an honor to be in this full-time role. I look forward to working with the city commission and staff to move the city forward into the future.

He has already made a good start in putting this year’s budget in place, but this is only the beginning.
Ripley noted that the town’s master plan needed to be “updated and rewritten” focusing on waterfront development, the town centre, the former sugar beet factory site, upgrading of parking lots and industrial properties, among others.

“These are the first steps of how we are going to move forward for the next 10 to 20 years,” he said.

A committee made up of Mayor Greg Mapes, Vice Mayor Roxann Harrington and Commissioner Nick Piccolo was tasked with the search.

In December, the group interviewed six candidates before narrowing the field to three finalists, including Ripley, who were to be interviewed by the seven commissioners.

However, before interviews could take place, the other two candidates withdrew, one choosing to remain in his current position and the other to find employment elsewhere.

At that time, city commissioners decided to delay the hiring process and start over in January by re-posting the position and accepting additional applications, while noting that Ripley would remain a finalist and be interviewed with all the others selected during the second search.

But it never got that far with Ripley finally getting the job after scores of citizens and community leaders wrote letters or showed up at commission meetings offering their support and urging the council to hire Ripley.

Now that the long process is over, he feels “relieved”.

“Yeah, that feels good,” Ripley said. “I can not wait to be there.”