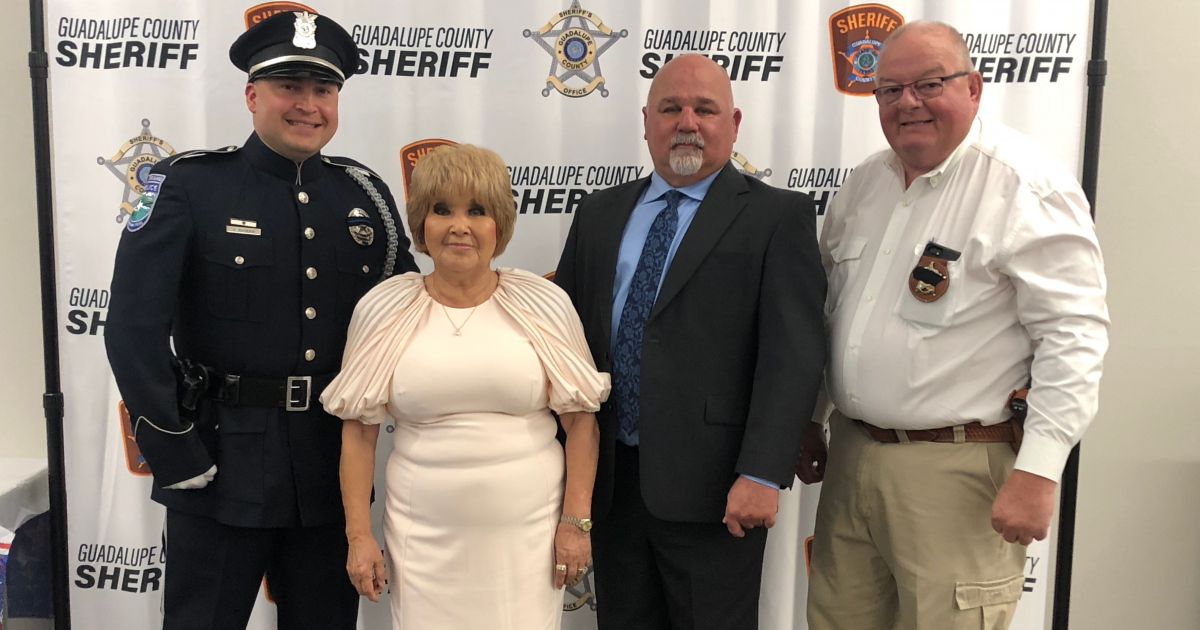 Pearland PD, Guadalupe County Sheriff’s Office come together to support local woman as she observes anniversary of her husband’s death

(Seguin) — When you’re in law enforcement, you and your family are part of a family that has no jurisdiction. That held true for a local woman who was recently surprised by a visit from the Pearland Police Department – a visit that helped make the 49th anniversary of her husband’s death a little more tolerable.

Lake McQueeney resident and businesswoman Kay Galyath was surprised at this year’s memorial service on National Law Enforcement Week (May 15-21) at the Sheriff’s Office of Guadalupe County.

Chad Rogers, an officer with the Pearland PD, says he is grateful to Guadalupe County Sheriff Arnold Zwicke for helping organize the surprise and welcoming them to Seguin.

“Mrs. Kay, her husband was killed in the line of duty 49 years ago which would have been Monday May 16th. So we held events in Brazoria County and we heard about this event here in Guadalupe and the opportunity the sheriff provided us to come here and surprise her. It was something we couldn’t pass up. We wanted to be here to obviously support her in a time when there is there’s a lot of memories and things coming back – fresh in the brain even though it was so long ago, but what’s important is that we reconnected with her about five or six years ago. We were working on a police memorial there in our police department and we started reaching out to families of officers who had been lost in the line of duty and they put us in touch with Ms Kay and we established a relationship that has continued since that point. So, el The is basically family and adopted us, so it’s nice to come here and hang out with her and enjoy this ceremony that the county had today,” Rogers said.

After losing her husband, Officer James Howard Cassidy Jr. in a motorcycle accident, Galyath moved to Seguin in 1987 not only to restart his life, but to start his business Bullseye Motors in New Braunfels.

Galyath says she couldn’t believe so much effort has gone into making this time of year easier for her and her family. More importantly, she says it kept her husband’s memory alive.

“Oh my God! It was overwhelming. I was surprised. I never thought this would happen. It’s wonderful. I appreciate it,” Galyath said. “I’m so proud. I can’t put it into words. I appreciate everyone.

Sheriff Zwicke has the privilege of calling her a friend. Zwicke says Galyath’s trust and respect for law enforcement is deeply appreciated.

“I actually met Mrs Kay when I first ran for sheriff in 2000. I met her at a fundraiser, and I got to know here and I learned her story of losing her husband. We have remained friends ever since. We go out to eat when we can together. She’s a great woman. Every time I mentioned something about law enforcement or the child advocacy center, she showed up with a check. She has become friends with a lot of officers here,” Zwicke said.

The sheriff’s office also acknowledged the death of K-9 Lorby who for years served as a crime-fighting tool in Guadalupe County.

Each of the Guadalupe County Commissioners Court members, including Judge Kyle Kutscher, were also on hand to recognize the daily sacrifices of first responders who serve in the county’s various law enforcement agencies.

The memorial also marked recognition of National Correctional Officers Week May 1-7 and National Nurses Week May 6-12.