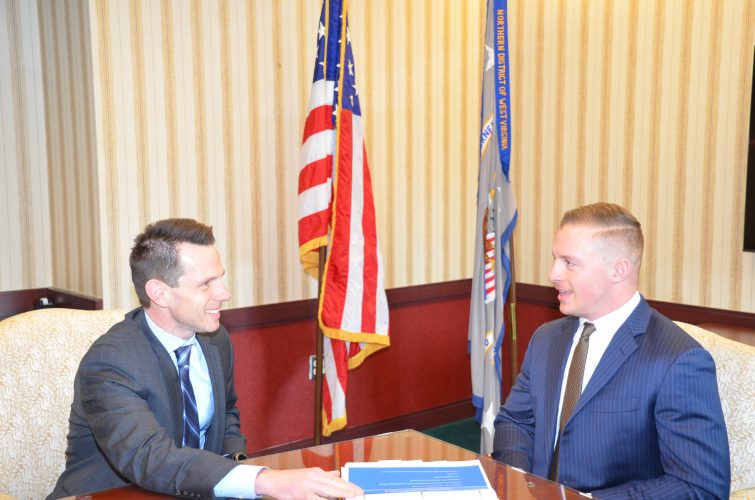 NAMED – US Attorney William Ihlenfeld, left, sits with Assistant US Attorney Max Nogay, from Weirton. Nogay has been named the new environmental justice coordinator for the Northern District of West Virginia.

Nogay, a Weirton native who has served as an assistant U.S. attorney since 2020, will lead efforts to enforce criminal and civil environmental laws, including the Clean Air Act, Clean Water Act and hazardous waste laws. In addition to arguing cases in federal courtrooms throughout the district, Nogay will attend community meetings where environmental issues are discussed and coordinate trainings for prosecutors and investigators.

“We are fortunate to have someone like Max Nogay to help protect public health and natural resources in West Virginia,” said Ihlenfeld. “He brings a lot of energy and enthusiasm to his work and will be sensitive to environmental concerns raised by citizens.”

Nogay will also enforce federal laws that provide for the humane treatment of animals throughout West Virginia, including captive, farmed, and companion animals. It will prosecute those involved in animal fighting operations and other types of inhumane criminal enterprises.

The public can report suspected violations of environmental and animal welfare laws to the U.S. Attorney’s Office by calling (304) 234-0100.


Today’s breaking news and more to your inbox