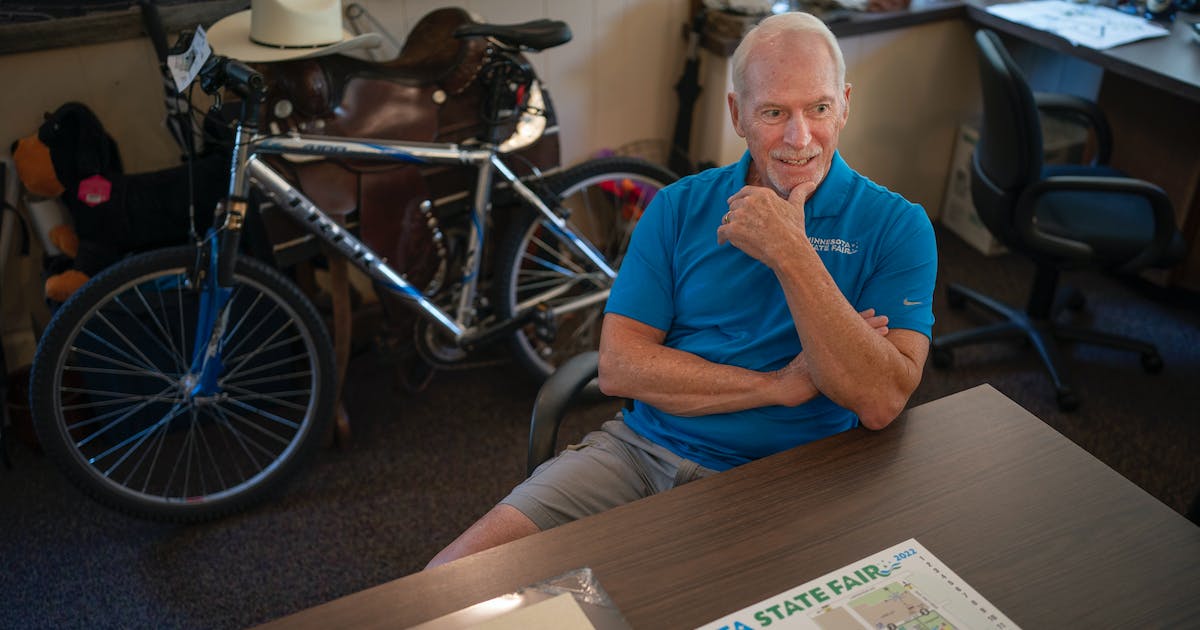 Longtime State Fair director invites everyone to ‘celebration of humanity’

When Jerry Hammer recently took his old Trek bike to the store for a tune-up, he was initially told it wouldn’t be ready for 10 days. Then the clerk realized who Hammer was and said the bike would be ready the next morning.

“We have to take care of our fair,” the clerk said.

Hammer, the Minnesota Star Fair’s general manager, and his staff hope the fair that opens Thursday in Falcon Heights will be closer to normal after COVID-19 forced the event to close in 2020 and reduced the attendance in 2021. Those two years make for the toughest chapter in Hammer’s 25 years running the fair, longer than any other State Fair general manager.

2020 “hasn’t been fun for anyone,” said Hammer, who bikes to the fairgrounds daily from his home in the St. Paul’s Como neighborhood and uses it to patrol the park’s 322 acres. exhibitions. “But when your business brings people together and that’s exactly what you can’t do, it puts you in a tough spot.”

Officials for this year’s fair have budgeted an expected 12-day attendance of 1.7 million. That would be down from the last pre-pandemic year, 2019, when the fair set an attendance record of 2.1 million. But it would be up from 1.3 million last year, when COVID variants and wet weather dampened attendance.

“We don’t expect a banner year, we never do, so we budget revenue conservatively and usually err on the low side,” Hammer said.

This approach has helped cushion the State Fair over the past two years. Although the closure of the event in 2020 created financial and organizational challenges, none of the 80 permanent staff employees were laid off or terminated.

“Our priority had to be to keep our organization intact despite the bankruptcy,” Hammer said.

In 2019, the State Fair recorded operating revenue of $62 million; last year it was down to $45 million, Hammer said. But fair officials made up for the shortfall by finding new revenue, restructuring debt and delaying improvements. In 2020, they held a drive-in fair, which sold out. And in 2021, there was a multi-day launch event over Memorial Day weekend.

The fair, which can issue its own revenue bonds, has lengthened debt payments. Prior to the pandemic refinancing, debt service was about $3 million per year and is expected to be repaid by 2027. Annual payments are now $2 million and will be repaid in 2032, according to Hammer.

Over the past two decades, the State Fair has used its borrowing power for major projects: renovating the grandstand (which Hammer calls “the cathedral”) in 2003; upgrading of the international bazaar and breeding facility in 2004; redesign of the West End and construction of the Transit Hub in 2014; and the construction of the North End Event Center in 2019.

But the pandemic has caused further improvements and maintenance to be postponed. “We’re in good enough shape to take a few years off,” Hammer said.

“The face of the fair”

On a table in Hammer’s office is a stack of colorful brochures with the title “State Fair Magic,” detailing customer service expectations.

“Treat everyone like your best friend,” he says. “Make eye contact and smile. Reach out to people who need help. Give everyone a few extra seconds of your time and attention. It’s the little things that make the difference.”

Hammer is “fully invested in providing the best possible customer experience,” said vendor Larry Abdo, who has operated at the fair since the early 1970s, first with the Pita Gourmet food stand and later with Big Fat Bacon. . He also owns Gopher State Ice, which supplies all the ice to vendors at the fair.

Abdo and Tim Weiss, the owner of Giggles’ Campfire Grill, praised Hammer as someone with a vision. “Everything is thought out,” Abdo said.

Before Weiss built Giggles at the Fair, he owned Gabe’s By the Park on Lexington Parkway and knew Hammer from the neighborhood. Hammer, he said, is “the face of the fair and he gets things done. He’s not a micromanager but a great manager.”

The State Fair board of directors appoints Hammer from year to year, and his salary is not public. Before becoming general manager, he led the fair’s marketing after starting as a summer worker in the greenhouse.

He talks about his longtime gig like he’s the luckiest guy alive. He said he enjoyed watching strangers on benches, sharing buckets of chocolate chip cookies.

“Whatever happens in the rest of the world, it doesn’t matter when you come to the fair,” Hammer said, adding that the gathering has moved beyond its agricultural roots: “We are so much more than that. for generations has been a celebration of humanity.”

After the fair was open for an hour on Thursday, Hammer said, he will lead what he calls “state fair fellowship,” his tradition since 1997. He buys a bag of hot Tom Thumb donuts on a stand near Ye Old Mill, then give the “to whom I see, whether I know them or not”.

Back at his office in the administrative building, he will slip the empty bag into a souvenir milk bucket to join the 24 bags from the previous opening days.

As for when he might retire, he gives no clue. His response: a smile, arms crossed over his chest and a terse response: “I’m 67.”

Weiss thinks Hammer could leave after this year — if, that is, the fair has a good rebound year. “He has to be in good financial shape and then he will retire,” Weiss said.

In the meantime, Hammer is focused on the next two weeks and is eager to help more people return after two years off at the Great Minnesota Get-Together.

“We’re wired to share experiences,” he said. “Human beings are social creatures. We need them.”