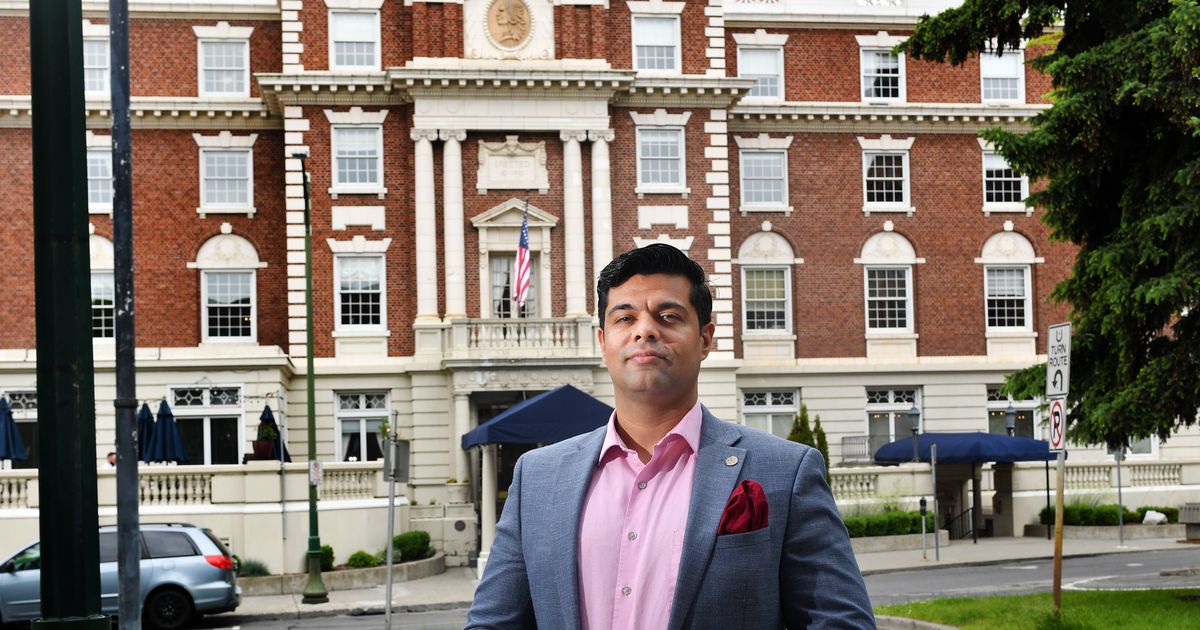 When Harmukh ‘Molly’ Sandhu became general manager of the Spokane Club in December, he saw the potential to restore this legendary hangout to its former glory.

Sandhu envisions a bustling patio filled with people enjoying the weather, updated hotel rooms with modern amenities, and a rooftop fitness area above the club’s existing sports facilities where members can participate in yoga, group fitness and other activities.

Most importantly, he sees a club that offers engaging activities while fostering an inclusive environment for its members and employees.

“I saw so many opportunities to really bring the club back to its past glory,” Sandhu said. “We had been really leaning during the pandemic, trying to retain members and cash flow.”

“The managers in every department are really committed to providing a great member experience,” he continued. “So I really felt that I would be able to succeed with such a strong team behind me.”

The Spokane Club, founded in 1890, has been a vital business and community resource for its members. Prominent Spokane architectural firm Cutter and Malmgren designed the Spokane Club’s historic Georgian Revival building, which was completed in 1910.

The Spokane Club hosts business, social networking and sporting events. It has over 3,000 members and 125 employees.

Members also have access to more than 30 private clubs nationwide through a reciprocal club program.

Sandhu has over 17 years of experience in the hospitality industry. He holds a Masters in Business Administration from the University of Adelaide in Australia.

“The Spokane Club is very fortunate to have Molly join the team at this important time in our club’s history,” Ross Blevins, Chairman of the Spokane Club Board of Directors, said in a statement.

“COVID has been a difficult time and we have a lot of hard work ahead of us. Molly is the perfect person to lead the charge as she is not afraid to challenge the status quo and drive improvement every day. »

Growing up in India, Sandhu developed a love for golf.

“My whole plan was to get into the golf industry, because I love golf and played it in high school,” he said.

During Sandhu’s senior year of high school, his plans for a career in the golf industry were put on hold after his father received an application form for ITC Hotels’ WelcomLegionnaire program in the mail.

ITC Hotels is an India-based hotel chain that operates 14 properties under The Luxury Collection by Marriott International, according to the company’s website.

“They were doing this special hotel course,” Sandhu said. “Instead of waiting for you to finish your hotel management degree in college, they actually recruited a small group of 10-12 kids, starting in high school, and trained them for four years as management trainees.”

“So by the time you’re 21, you get a manager’s degree at Marriott, which puts you at least five years ahead of the average person who becomes a manager there,” Sandhu continued.

Sandhu was among 10 students selected for the program after a series of interviews.

The group of students learned cooking and housekeeping methods, and received hands-on training in hotels.

“Then in the third year you can select a specialization,” he said. “You can choose reception, food and beverage or housekeeping. I chose food and drink.

After Sandhu moved to Australia to pursue his master’s degree, his mentor, golf entrepreneur Greg Ramsay, introduced him to Craig Haltom, chairman of Oliphant Golf Management, a golf course construction and management company based in in Wisconsin.

Sandhu worked on several projects for Oliphant Golf Management and moved to Chicago in 2020.

In 2021, he began working for KemperSports, a Northbrook, Illinois-based property and experience management company that oversees the operations of more than 100 sports, recreation and event facilities and fitness centers. resorts nationwide, including the Spokane Club.

“I would be the guy who coordinates between the software company and the club to make sure everything is running smoothly, everyone is trained and everything is set up correctly,” he said. “I was basically traveling to different states every month to different clubs to do this.”

Sandhu was selected to serve as interim general manager of the Spokane Club in September 2021, succeeding John O’Connor, who left for a managerial position at the Los Angeles Athletic Club.

Club management interviewed candidates across the country for the post of general manager, but struggled to find a candidate with experience in all facets of retail, food and beverage and private club management, Sandhu said.

“My plan was to be here for a month and it got longer and longer,” Sandhu said. “Finally, it was December, and the area regional executive for KemperSports said, ‘Hey, do you want to keep it up?’ ”

It was a big decision for Sandhu and his wife to move to Spokane after buying a house in Chicago.

“My wife is a psychiatric nurse practitioner so she would have to move out and we have a baby,” Sandhu said. “But when she saw the area, she really liked Spokane. It seemed like a safe place to raise a family. So she said, ‘Let’s do it.’ And I said yes to work.

Sandhu, his wife, Morgan, and their daughter, Aadira, packed up and crossed the country from Chicago to Spokane with two dogs and a cat.

Sandhu sees the Spokane Club as a gathering place where people can network, make friends and relax.

“Maybe it could come with your friends every Saturday after work to have a drink and hang out on the patio,” he said. “Or maybe go out and do a yoga class every morning.”

The Spokane Club is selling its Spokane Valley property and corresponding land for $4.4 million to local developer Jordan Tampien, who will continue to operate it as a tennis club and build 106 residential units on a vacant portion of the site of 9 acres at 5900 E Fourth Avenue.

The sale, which is expected to close by June 30, allows the Spokane Club to continue its legacy and eliminate all debt, including a $3.3 million loan, according to a Spokesman-Review article published in April.

By eliminating the loan, the Spokane Club “will be in a much stronger financial position to begin reinvesting in downtown facilities,” Blevins wrote in a message to members.

The Spokane Club purchased the Spokane Valley property when it had excess cash, which was reinvested in renovating the facility.

Over time, the Spokane Valley club failed to generate enough revenue to support itself. Maintenance and upgrades at the downtown club have been put on the back burner, Sandhu said.

Once the sale of the Spokane Valley property is complete, the Spokane Club’s downtown location will likely undergo several upgrades, Sandhu said.

The club is allocating about half a million dollars to purchase new furniture, fixtures and repairs to the exterior of its building, Sandhu said.

“We want to continue to focus on building a building that’s a bit more environmentally friendly, because a lot of our equipment is old,” he said. “We want to start doing it slowly so that we use fewer resources.”

Sandhu would also like to add new family-oriented amenities and possibly create a rooftop fitness area above the club’s existing sports facilities for group fitness classes, pickleball and yoga.

“I just want the Spokane Club to be the best in the league. We’re not competing with anybody else, but we want to be the best for who we are,” he said.

Sandhu said he wanted to take inspiration from the luxury hotels he worked for to create a unique experience for Spokane Club members.

“I’ve seen places do amazing things and I just want to recreate that here, but at the same time keep its legacy,” he said. “I don’t want to change everything, but if there is a place that offers amazing cocktails in the bar, I want to replicate it here, so that our members can enjoy it.”

“Engaging with the community is something I really want to do,” he said.

Sandhu and his family are looking forward to settling in Spokane. Sandhu and his wife, Morgan, have bought a house in the West Plains and are expecting another baby in September.

“It’s really funny because I’ve met so many people who say to me, ‘I came to Spokane in 1987 for a summer vacation and I never left.’ Hopefully it becomes the same for us,” Sandhu said.

“We feel settled and think this is a great place to start the next chapter of our family.”

2022-06-19
Previous Post: The mayor of Seville supports the local police officers sentenced for the murder of a thief
Next Post: UN coordinator and US ambassador urge restraint, investigate excessive force