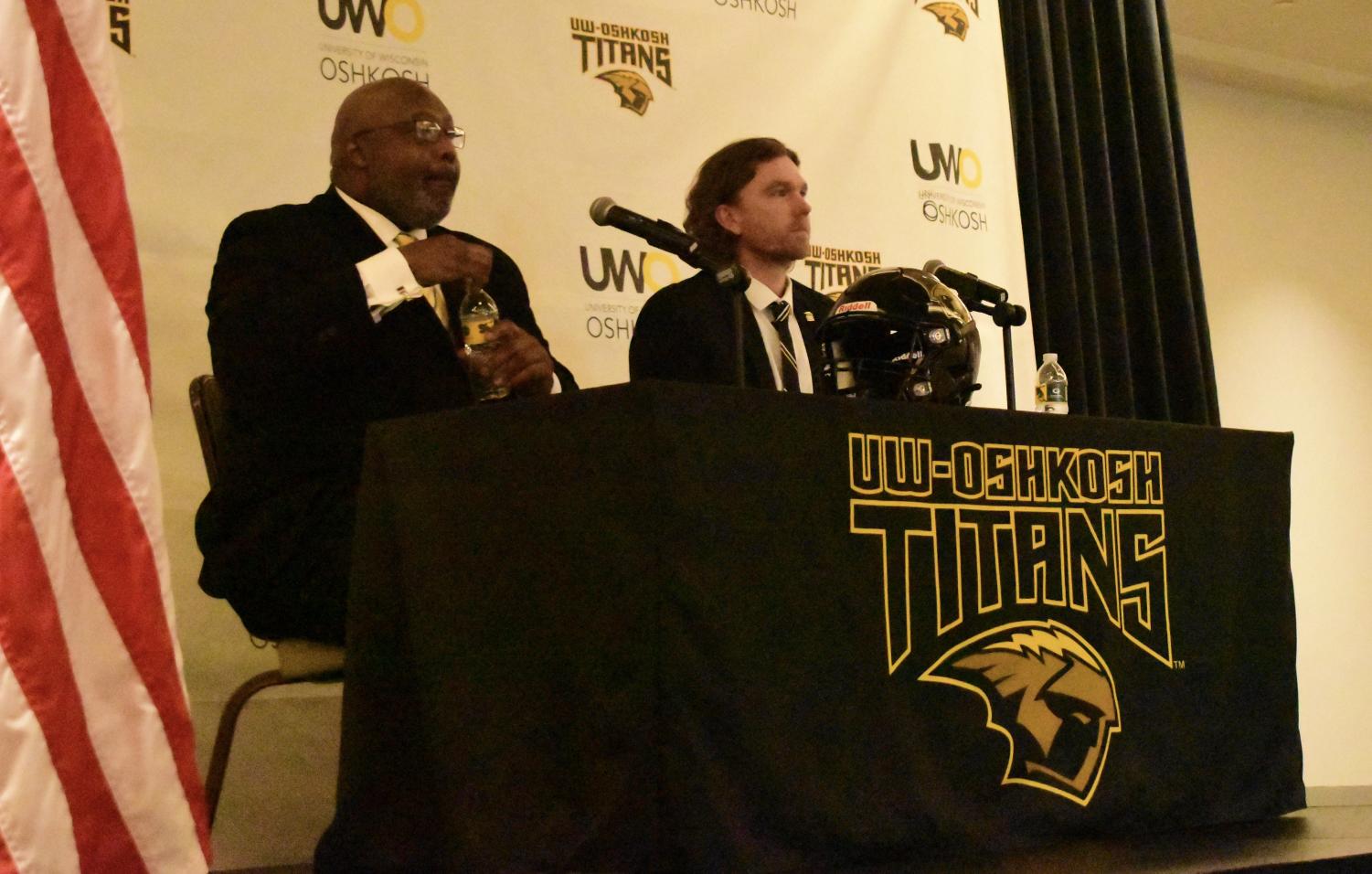 UW Oshkosh Athletic Director Darryl Sims announced today that Peter Jennings will be the new head coach of the Titan football team during a press conference at the Culver Family Welcome Center.

“Peter has a real vision of Titan football,” Sims said. “He is a strong leader. He has an innovative football spirit and has demonstrated the ability to work well with student athletes: to help them succeed in the classroom and on the football field.

Jennings served as the offensive coordinator for four seasons at UW-Whitewater, where he helped the Warhawks go 39-4 and win three Wisconsin Intercollegiate Athletic Conference (WIAC) championships from 2018-21. qualified for the 2019 NCAA Division III Championship Game and reached the semifinals in 2018 and 2021.

“His enthusiasm is contagious and resonates well with the players and coaches,” Sims said. “He understands the makeup of WIAC and what it will take to be successful at our conference. I look forward to working with Peter.

Jennings succeeds former head coach Pat Cerroni, who announced his retirement in November, and becomes the 23rd head coach in the 126-year history of the UWO football program. The Titans have only had six different head coaches between 1946 and 2021.

“Let’s get this team moving,” Jennings said. “I’m so excited to be here. I’m honored to be named the next head football coach here.

Jennings, who said he would call the games next season, then spoke of his excitement at joining the Titan community. “The black, the gold, Clash the Titan, the story of this phenomenal athletic department that won 47 national championships and counting,” Jennings said. “The University and all of its elite academic offerings, the Fox Valley’s fertile recruiting grounds. And this incredibly vibrant campus community. It is truly a dream come true for me and my family.

With Jennings leading the offense, UWW averaged 40.9 points per game last season. He also mentored two Warhawk quarterbacks who were voted WIAC Offensive Player of the Year: Max Meylor (2021) and Cole Wilber (2018). Jennings coached 10 DIII All-Americans and a recipient of the DIII Rimington Award, given to the top center in the nation, while at Whitewater.

“Being a head coach is a huge responsibility and I will never take that responsibility for granted,” Jennings said. “Our staff will first and foremost be teachers. We will provide an inclusive environment for all members of our football program. We will be honest and energetic and we will always put the well-being of our student-athletes first. »

Prior to coaching at Whitewater, Jennings served as offensive coordinator and associate head coach at Rhodes College in Memphis, Tennessee, from 2016 to 2018. The Lynx set program season records in total touchdowns, touchdowns rushing, total yards and passing yards during that time.

Jennings coached at Carroll University in Waukesha from 2012 to 2016, where he was the offensive coordinator. He helped the offense reach its two most successful seasons in school history. He was also the interim head baseball coach with the Pioneers in 2013.

“To my family, I started pursuing this work when we were walking down the main street of Lake Geneva,” Jennings said. “I emailed Darryl, expressing my interest and letting them know that I wanted to be part of this great work. I wouldn’t be here right now without my wife Kim, my son Ben and my daughter Mara. Their support and their unwavering enthusiasm for football and their passion for what we do as a family is phenomenal and contributes to who I am.We are so lucky to be part of the great community of Oshkosh.

Titans interim co-head coach Luke Venne, the offensive coordinator, was a finalist for the head coaching position. When asked what this hire means to him, he replied: “I love Titan football and I’m looking to keep building. [on our] Success.”

UWO’s current streak of 10 consecutive winning seasons is the longest in program history. Last season, the Titans were 6-3 overall and finished fourth in the WIAC with a 4-3 conference record. The Titans are scheduled to open the 2022 season against East Texas Baptist University on Sept. 10 at JJ Keller Field in Titan Stadium.

“I finally arrived at my destination, the University of Wisconsin Oshkosh,” Jennings said. “Here, the bar has been set extremely high. I so appreciate the faith that you [Sims] have to advance this elite program.